What is in Laundry Detergent 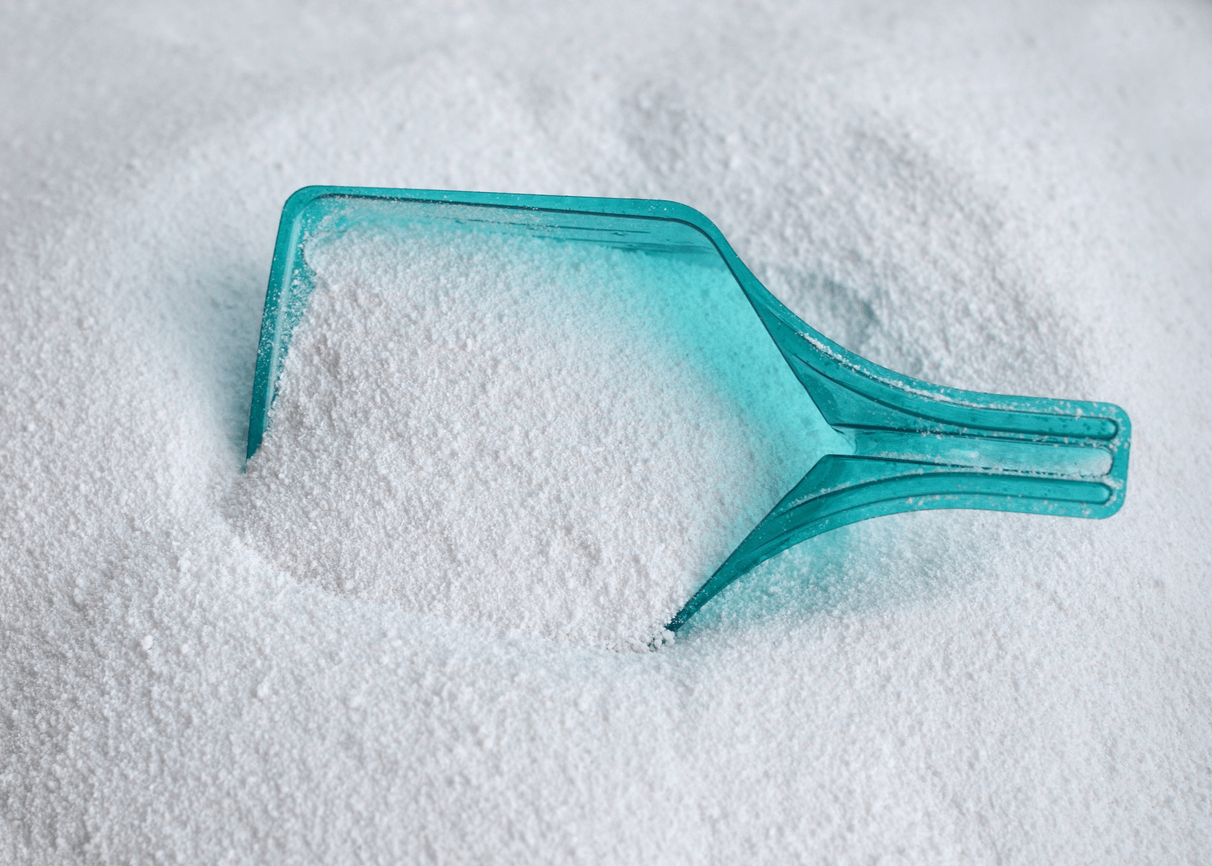 Understanding the list of ingredients on your laundry detergent bottle or box can be tough. Long chemical names and science jargon often doesn’t tell you much. This glossary of common laundry detergent ingredients and their functions will help you know more about what’s in your bottle, box or pak.

Like any other material in the universe, your laundry detergent contains chemicals, but don’t let the word scare you. A chemical simply refers to a substance that has been processed, purified, refined or prepared from another substance. They are created when scientists take a substance, such as an ore, seed, fruit, or vegetable and break it down into its components. Baking soda, for example, is refined from a crystallized salt called trona. It wouldn’t be very useful in baking or cleaning as a rock, so the refining process crushes it, exposes it to carbon dioxide from the air, and makes the familiar white powder you encounter every day. Scientists can also take an element’s molecular components and recombine them in new ways to make specialized chemicals by adding oxygen, carbon dioxide, hydrogen, or sulfur, for example. To make laundry detergent, scientists isolate parts of ores or liquids from the earth such as trona and petroleum or plants such as palm kernels or coconut and create the specific substances that make detergent work.

How Does Laundry Detergent Clean Clothes?

Ingredients in laundry detergent (except for dyes, fragrances, optical brighteners, and preservatives) attract, break down, surround, and remove dirts and oils, or help those ingredients do their job better. Read on to learn about each type of ingredient and what it does to help your clothes get clean.

Types of Ingredients in Laundry Detergents

Anti-redeposition agents - These ingredients suspend dirt and oils pulled from your clothes by surfactants in the wash water. They allow dirt to rinse away when the water drains instead of settling or “redepositing” onto your clothes.

Builders - These ingredients help enhance the efficiency and effectiveness of the surfactants (see below).

Chelators - These ingredients target naturally occurring metal ions in water, especially in “hard water” and prevent them from interfering with the cleaning action of the surfactants.

Dye/Colorant - This is an optional ingredient that makes laundry detergent more visible and pleasing to the eye.

Enzymes - Some laundry detergents include these biological agents which target a single type of stain: protein, starch, fat, or thickeners. The most effective laundry detergents contain multiple enzymes. Because these enzymes are organic components, detergents that contain them also include stabilizers and preservatives.

Fragrance - Clothes with a fresh, pleasant scent feel and smell cleaner. While fragrance doesn’t really play a part in removing dirt from your clothes and linens, launderers have been adding scent to their process for centuries. People also added sachets of herbs and dried flowers to their wardrobe and trunks for the same reason. Laundry detergents have unique scents developed by scientists and tested extensively with consumers. As with perfumes, each fragrance is a proprietary blend of many ingredients, derived from a variety of substances. When used in the diluted proportions in laundry detergent, most people overwhelmingly prefer them. Recently, scientists have developed hypoallergenic fragrances suitable for sensitive skin, and laundry detergents are available in both scent- and dye-free formulas.

Optical Brighteners/Fluorescent Whitening Agents (FWA) - These ingredients coat your fabric’s fibers with a UV reflective substance that causes them to reflect more blue light. This makes the fabric appear brighter and less yellow or dingy.

Preservatives - These can be added to detergents to protect against the natural effects of aging such as decay, discoloration and oxidation, and to prevent bacteria growth.

Stabilizers - These ingredients keep the laundry detergent stable while it’s in the bottle, box, or pak, and help maintain performance over the life of the product

Surfactants - These special ingredients are molecules organized as long chains. One end of the chain loves oil and dirt. The other end of the chain loves water. The surfactant binds to the dirt and oils in your clothes on one end, and then binds to the water on the other. The two ends pull, kind of like a truck pulling a car out of a ditch. Eventually the soil breaks loose, and the surfactant molecules surround the particles and suspending them in the water. When the washer drains, the dirt and oils connected to the surfactants wash away 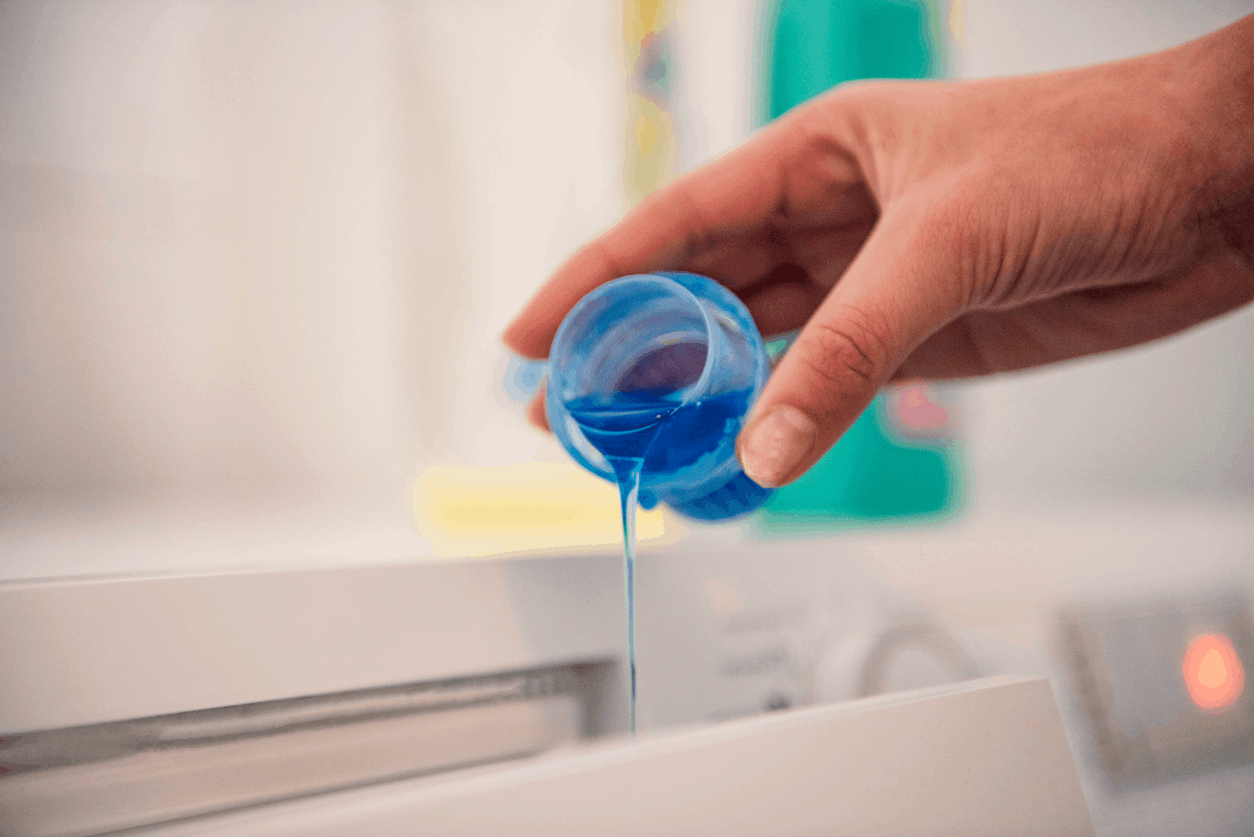 Acrylic acid homopolymer – Also known as polyacrylic acid or Carbomer, this alkali salt is used as a dispersing agent in detergents, paint, and nail polishes. It keeps liquid combinations together (think of an emulsified oil and water mixture, such as mayonnaise or salad dressing) and allows for even concentrations of ingredients throughout the liquid.

Alkylbenzene sulfonic acid – Also sometimes listed as linear alkylbenzenesulfonate, this is one of the most widely used anionic surfactants in the world. It’s been around since 1964, and can be found in many liquid soaps, shampoos, dishwashing detergents and laundry detergents. In detergents, it surrounds dirt and oils and then bonds with water to remove them with the rinse cycle.

Amylase – An enzyme that targets and breaks down starch-based stains such as from corn, potatoes, rice, and many thickeners.

Borax pentahydrate – In liquid laundry detergents, this ingredient helps to stabilize enzymes and keep them from degrading in the bottle. It also softens water to allow the surfactants to work better. In powdered detergents, it is used to adjust pH.

Calcium chloride – This ingredient is used in laundry detergents to stabilize enzymes and keep them from degrading in the bottle.

Carboxymethylcellulose* – A polymer that contains plant fibers and is sometimes used in liquid laundry detergents to help build the viscosity – or to make the liquid thicker and less runny. It also helps keep dirt that has been removed from clothes from settling back onto them.

Citric Acid – This ingredient is common in sour foods and citrus juices, but when used in laundry detergents it helps to prevent mineral buildup on your clothes and your washing machine.

Disodium distyrylbiphenyl disulfonate – An optical brightener that coats clothing fibers to make them appear more white or bright. It’s similar to the former whitening technique known as “bluing” and works by causing the fabric to reflect more blue light vs. yellow light. Your clothes come from the store coated with optical brighteners. As these wear off over time or with repeated washing, clothes appear dingy and less white. This ingredient adds the brighteners back to the clothing fibers.

Ethoxylated C12-15 alcohols – These non-ionic surfactants are a “fatty alcohol” that helps break the surface tension of water. This allows your laundry to get wet and the cleansers to penetrate the clothing fibers. Linear surfactants biodegrade quickly and are more environmentally friendly. They are widely used in laundry detergents, cosmetics, and glass or surface cleaners.

Linear alcohol ethoxylate is a common ethoxylated C12-15 alcohol you’ll find in many laundry detergents. It bonds to grease and oil deposits on your clothes to pull them out of the fibers and away in the rinse. It’s especially good for cleaning oils and sweat from our own bodies that end up on clothes and linens, as well as greasy stains from foods or makeup.

Fragrance – An optional ingredient in laundry detergent to make your clothes smell clean, fresh, and pleasant.

Hydrated silica – This compound naturally occurs in the form of the opal gem and as diatomaceous earth. About 12 percent of the earth’s crust is made of silicon dioxide, from which hydrated silica is derived. It’s commonly used in toothpastes and as a stabilizer in beer. In laundry detergents, you’ll usually find it in the individual paks to aid in breaking down the packet and helping other ingredients work.

Hydrogen peroxide – Some laundry detergents and stain pretreatment solutions contain hydrogen peroxide to help whiten and brighten clothes, disinfect them, and reduce soap buildup. It breaks down into oxygen and water, so it’s safe for the environment and your home.

Lipase** – An enzyme that targets and dissolves fat-based stains such as from butter.

Liquitint™ blue dye – A dye that makes your laundry detergent a deep, rich blue but doesn’t color your clothes.

Mannanase – An enzyme that targets food stains that contain common additive and thickeners used in foods such as guar gum and xanthan gum.

Palm kernel fatty acids – Derived from the seed of an oil palm plant, this common ingredient is used to control lather and suds in shampoos, soaps, and detergents. It also helps hold liquid detergents together and allow the surfactants to work better. In ARM & HAMMER™ laundry detergents, palm kernel fatty acids are used as a defoamer, so there aren’t too many bubbles in your machine.

Propylene glycol – This common food additive is also used in powdered laundry detergents as an anti-caking agent to help keep the powder loose and separate.

Protease – An enzyme that targets and breaks down protein-based stains such as chocolate, blood, and grass.

Sodium carbonate – Also known as soda ash or washing soda, this ingredient acts as a chelator, pH adjuster and a booster that helps other ingredients clean your clothes more effectively. It is a naturally occurring compound mined from the earth as trona ore and refined into powdered form.

Sodium formate – This is an enzyme stabilizer in liquid detergents. It keeps the enzymes from degrading in the bottle so they are ready to work when they hit the water in your machine.

Sodium hydroxide – Used to adjust the pH in laundry detergents. Detergents containing enzymes need their pH lowered so that the enzymes remain stable. Other detergents have higher, or more alkaline, pHs to prevent microbial growth and to target many acid-based stains, such as tomatoes and most condiments.

Sodium laureth sulfate – A common anionic surfactant often created from coconut oil, palm kernel oil, or a synthetic source. Used in shampoos, body washes, eye liner, mascara, and many detergents, sodium laureth sulfate creates lather and foam, and binds to dirt and oils to remove them from your laundry.

Sodium percarbonate – Also sometimes listed as sodium carbonate peroxide, this ingredient is used in powdered detergents as a chlorine-free bleaching agent. It’s made by adding hydrogen peroxide to soda ash (sodium carbonate). When it comes in contact with water, it releases oxygen and hydrogen peroxide to get clothes cleaner and brighter. It breaks down into just water and oxygen, so it’s environmentally friendly.

Tetrasodium EDTA – A common chelator or chelating agent, it works to surround and trap metal ions found in hard water, such as calcium, iron, copper, and magnesium. This is important to keep them from interfering with the cleaning process.

Water – Liquid detergents contain water to hold, suspend, and carry all of the other ingredients. Powdered detergents are made to dissolve in water, allowing its ingredients to then get to work.

Zeolite – This ingredient is a natural volcanic rock added to some laundry detergents to absorb metal ions that occur in water, making it more “soft” and more effective for cleaning.

Learn More About Laundry Detergent Ingredients and How They Work

If you want to learn more about how laundry detergent works to clean your clothes and other items, read our article that explains what happens once these ingredients get inside your washing machine.

Our ARM & HAMMER scientists work carefully to create the safest, most-effective, most affordable laundry detergents available. There are multiple formulas to suit your preferences, from powdered to liquid to individual paks and from popular fresh scents to fragrance- and dye-free. 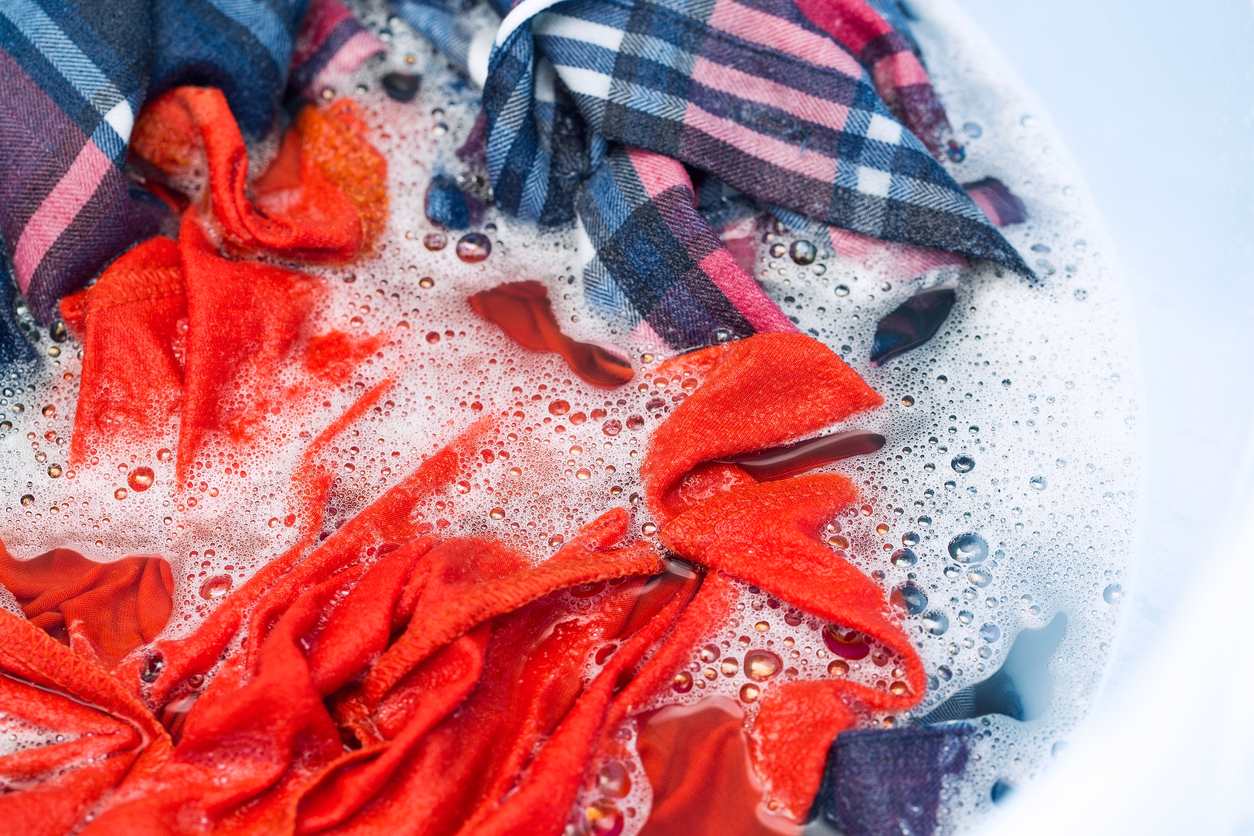 Some of our favorite detergents include:

* This ingredient is not used in ARM & HAMMER™ laundry detergents or pretreating laundry products, but may be found in other brands’ formulas. 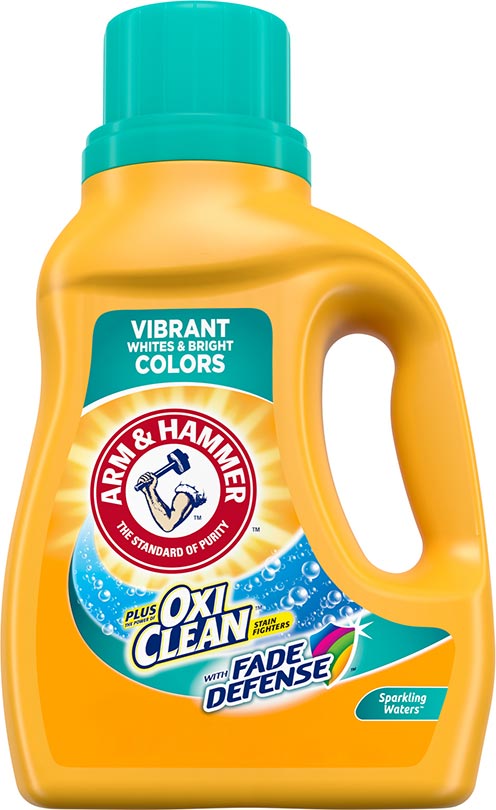 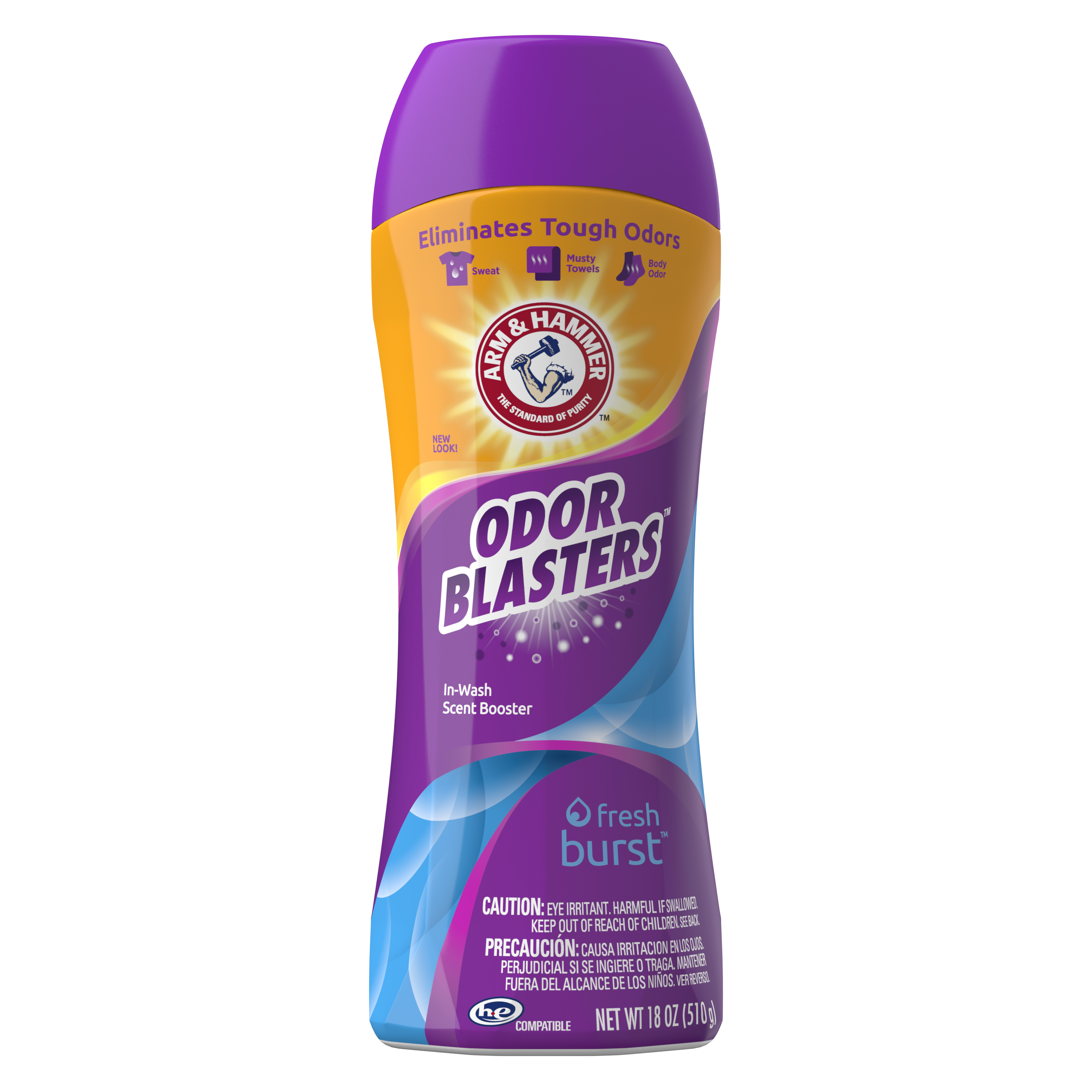 What Are Laundry Detergent Packs?

Organize Your Closet in 5 Steps

How to Do Your Laundry Like a Pro in 6 Steps