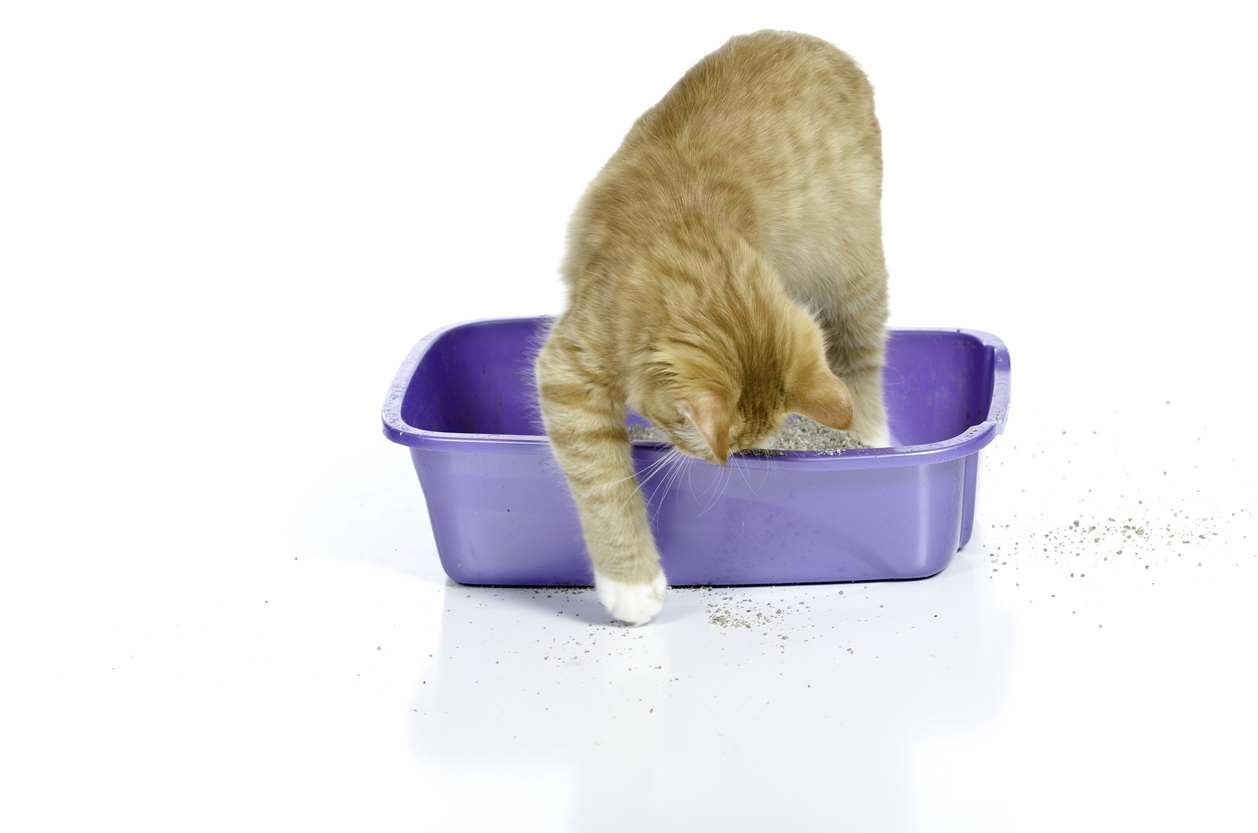 Cats are wonderful companions, but no one wants to see cat litter on the floor, your cat’s paws, or anywhere except in the litter box where it belongs. Some litter tracking is a fact of life, but here are 5 tips to help keep it from getting too far from the box.

What Causes Cat Litter to Track and Get Everywhere?

There isn’t one simple factor that causes cat litter to track outside the litter box. Litter tracking has to do with your cat’s particular habits as well as the type of litter and litter box, where you put the box, how much litter you use, and how you clean up after kitty.

If your cat is a “digger” who scratches and flings litter outside the box every time he uses it, you’ll have different challenges than a kitty who doesn’t bury their poo. Some cats even lay in their litter box for reasons that are mysterious to humans but make sense to feline brains. One kitty loves non-clumping pellet-style litter, and another kitty will only use unscented clumping litter.

You can make changes to reduce tracking, but those changes won’t help if it upsets kitty and makes her stop using the litter box. That’s trading one problem for a worse one. Every home is different and you’ll want to choose the litter tracking solutions that work best for you and your furbabies. Here are five to consider.

1. Reduce Tracking with Your Type of Litter 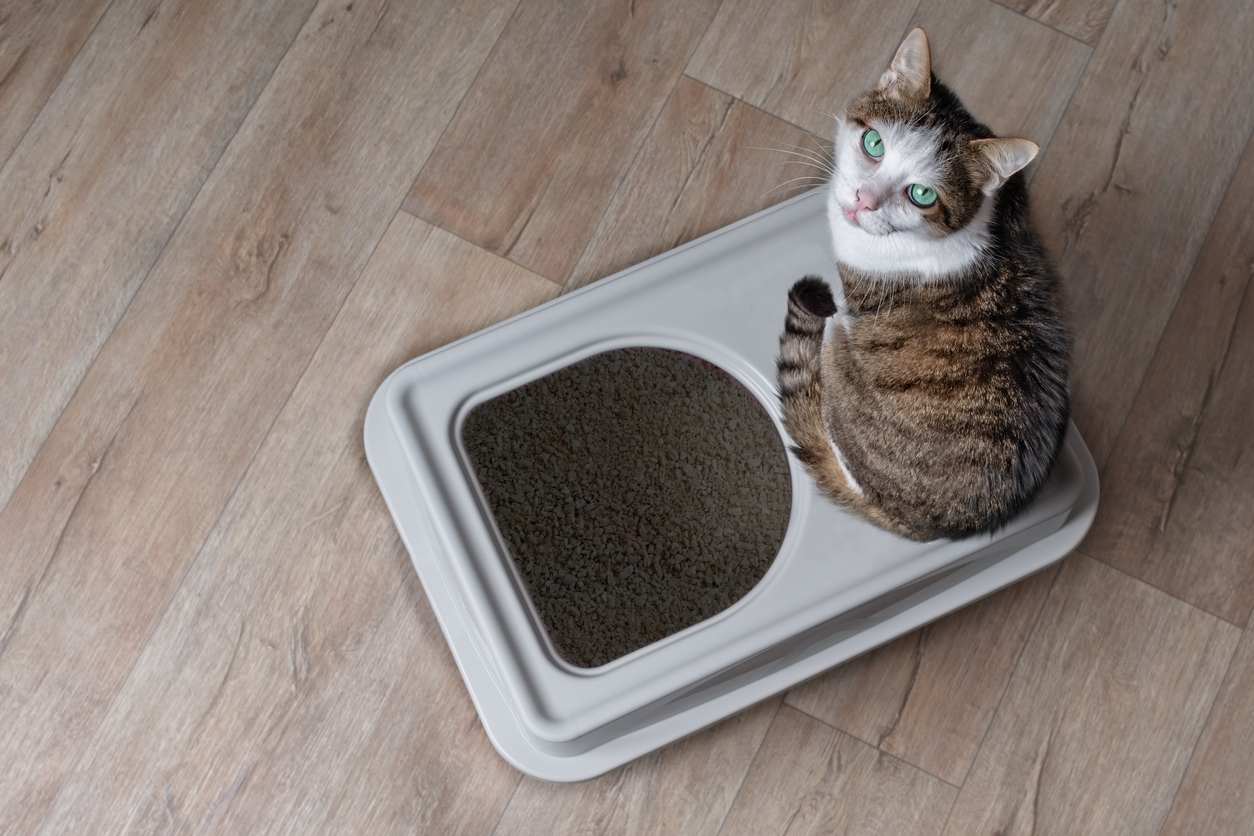 As with all things, there are trade-offs, so going with a lower tracking litter may have other downsides. You’ll have to decide what the optimal balance of cat litter features is for you and your kitty.

In general, these litters tend to track less:

2. Help Prevent Tracking with Your Choice of Litter Box 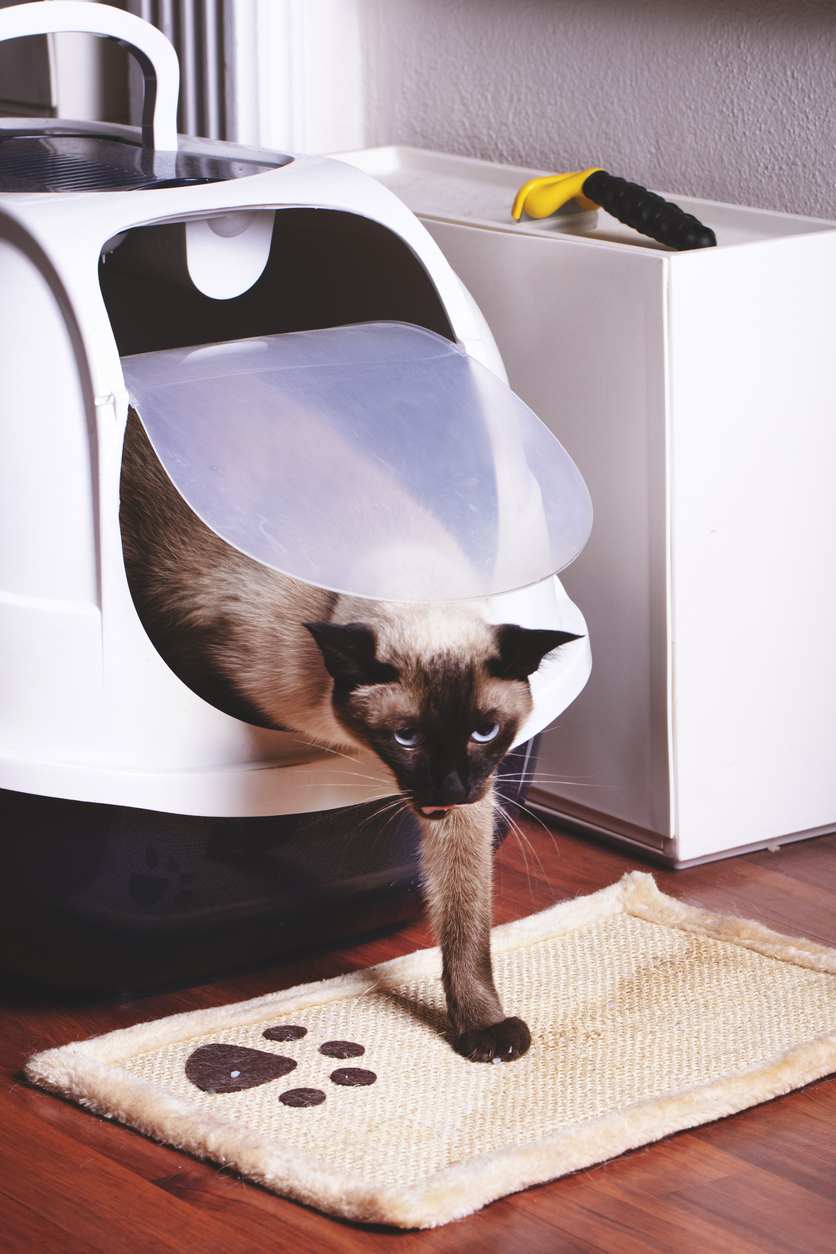 You can have some control over how much litter gets on the floor by choosing certain types of litter box. For a litter box that helps reduce litter tracking try:

3. Where you Set Up Your Cat’s Litter Box Affects Tracking

Not only does the type of litter and the type of litter box have an impact on how much litter tracking happens in your home, so too does where you put the litter box. Litter boxes that are hidden in cat furniture or in farther away areas will keep litter contained to specific areas.

Get some more ideas for where to put the litter box or how to make DIY cat furniture for inspiration! 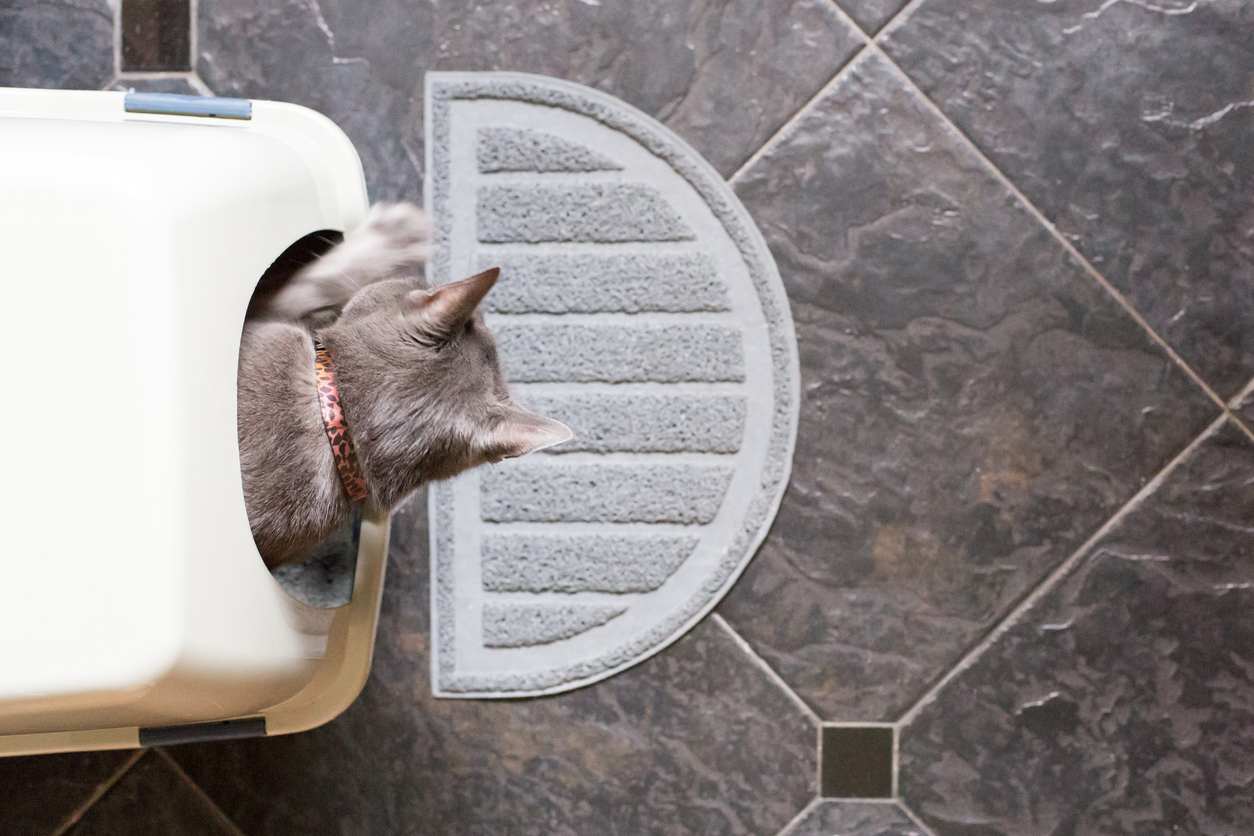 Litter mats are one of the best inventions for helping stop litter tracking. Basically, you set your litter box on top of or in front of a piece of carpet, fabric, or specially designed mat to help “wipe” kitty’s paws as they exit the litter box. The mat also helps contain any litter scatter from kitty’s vigorous scratching. By getting litter particles on the mat instead of the floor, it’s harder for them to be tracked as far from the box.

Litter mats can be as simple as a carpet remnant, bath mat, or old towel. You can also purchase specialized silicone or fiber litter mats similar to door mats that trap dirt and debris before it can track throughout the house. Some litter mats funnel dirt and particles away from the surface and trap them in the mat’s fibers to reduce tracking and dispersion. Simply pick up the mat and shake it out, vacuum it or wash as part of your litter clean up.

Litter mats come in various sizes, and bigger is usually better if you have the space around your litter box. The larger surface allows kitty to take more than one step on the mat to get litter off paws and to have a wider area around the box to catch any litter that escapes during use. The largest portion of the litter mat should be in front of the litter box exit point if the box has a specific opening and around the external sides if an open box is against the wall.

There are even litter mats designed for corner litter boxes, so shop around to find one that fits your litter box set up best.

5. Help Keep Litter from Tracking Everywhere with Daily Clean Up

It might be obvious, but how and how often you clean your litter box affects litter tracking. The more frequently you clean the litter box and how careful you are when scooping clumps of urine and feces impacts the amount of litter that gets outside the box. The longer you leave litter on the floor around the box, the more it can get tracked by human feet and cat paws.

Here are some tips for litter box cleaning that help prevent or reduce tracking:

Help Stop Litter in its Tracks with a Combination of Strategies 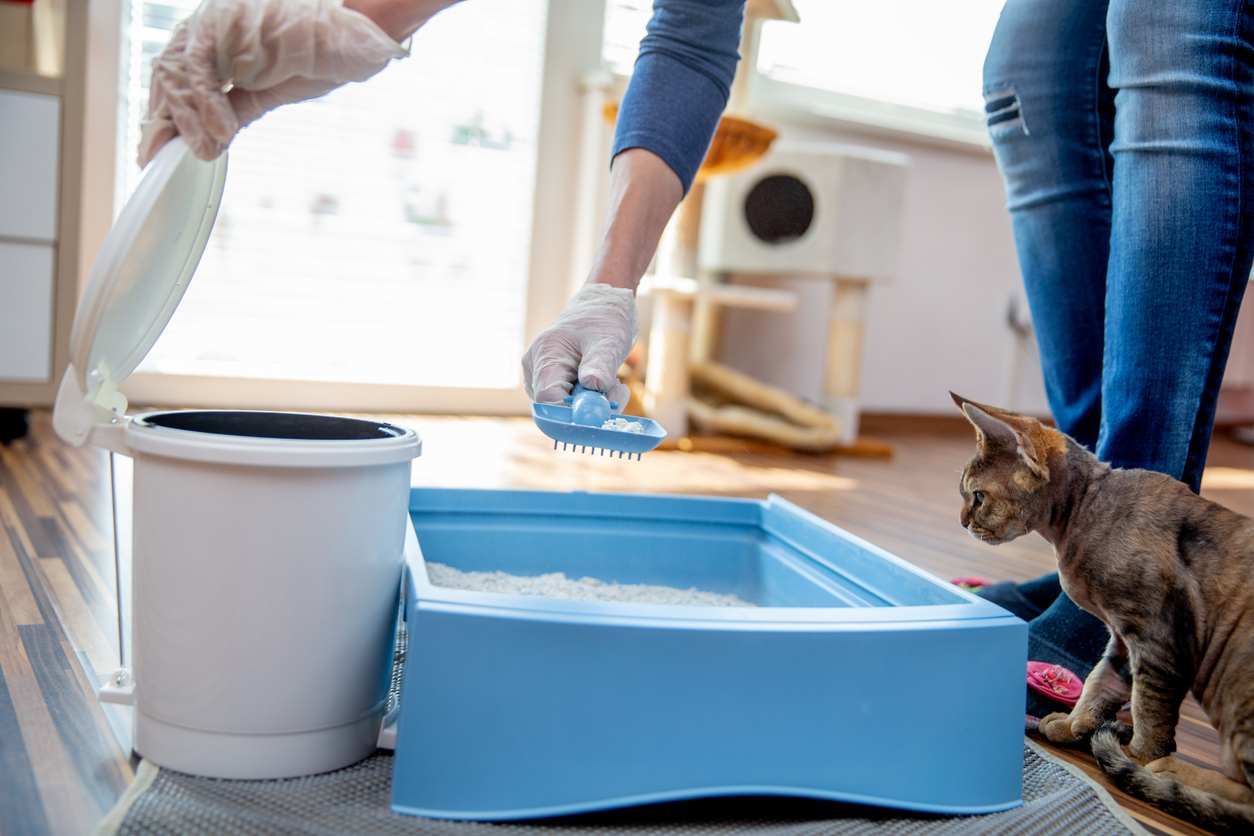 And remember, if you decide to try a new litter, go slowly and monitor your cat. The best litter is one your cat uses regularly without complaint and that gives you what you need in terms of benefits, such as easy clean-up, ability to carry and pour the litter, wetness absorption, odor control and lower tracking. 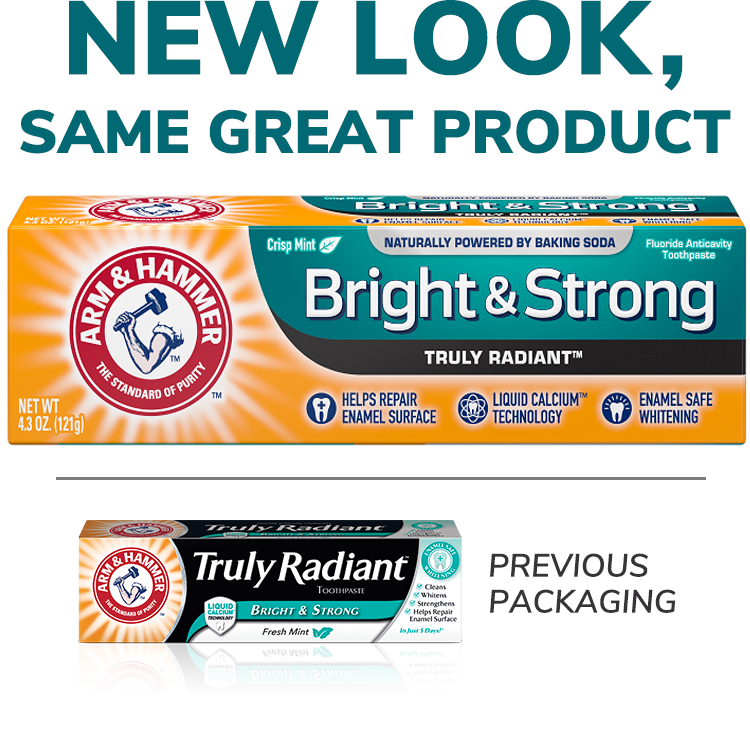 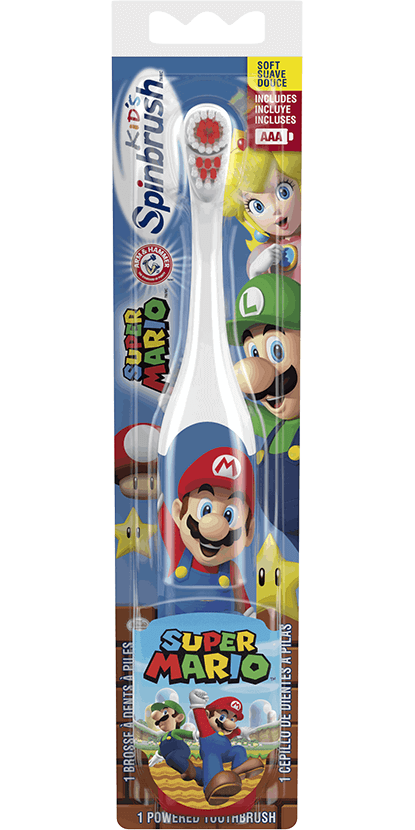 How to Help Whiten Teeth with Baking Soda

The Truth About Sensitive Teeth

5 Reasons Why Brushing with Baking Soda is Better